Books of Bugtopia brings the stories of the Book Bugs directly to you!

Meet Attie, the intrepid ace reporter whom you can count on for the latest scoop in Bugtopia! 🕵️📰 If Attie were human, he might be a news reporter on a television news channel. Learn more about news reporting in ‘TV Launches 24-Hour News with CNN’, written by Michael Burgan.

Shrouded in mystery, Celeste is rumoured to be able to weave exquisite creations using pure moonlight… 🌛 Celeste is based on Luna from ‘The Girl Who Drank the Moon’, written by Kelly Barnhill. In the book, Luna gains magical powers after being fed moonlight by a kindly witch.

Khazanna carries her own little library around to ensure that she always has something good to read! 🤓📚 Her design was inspired by ‘Ada Khazanah di Perpustakaan Kami’ (There are Treasures in Our Library), written by Maria Mahat.

The adorable Book Bug, Rollie, was inspired by the pangolin, an endangered mammal that can be found in Singapore. Like the pangolin, Rollie is covered in protective scales and curls up into a ball when frightened! Read more about local animals in Maureen Yeo’s ‘The Great Singapore Poo Sale’.

Nothing perks up Embra’s day more than a fabulous firework display—especially if she was the one who created the fireworks! 🎇 Embra shares her love for colourful pyrotechnics with Lila, the main character in ‘The Firework-Maker’s Daughter’ by Philip Pullman. In the story, Lila goes on a perilous journey to chase after her dream of becoming a firework-maker. Find out if she succeeds by reading the book.

Anyone who catches a glimpse of Cenderawasih’s magnificent wings is lucky indeed! 🤩 This majestic Book Bug is based on the mythical Cenderawasih bird, featured in the book, ‘Lagu Cenderawasih’ (Song of the Cenderawasih), written by Tutu Dutta. It tells the story of Arohan, a little boy who receives a magical bamboo flute for his birthday.

Meet Kaka, the Book Bug with a big appetite who loves to frolic in the snow! ❄️ He is based on Inuka, the first polar bear born in the tropics, that lived in the Singapore Zoo from 1990 to 2018. You can read about Inuka’s life in Alan John’s book, ‘独一无二的伊努卡’ (The One and Only Inuka), which is also available in English.

No Book Bug moves through the water faster than Nixie, whose inspiration came from the book, ‘The Mermaid Who Became a Champion’. It was written by Yip Pin Xiu, a five-time Paralympic gold medalist!🏊‍♀️🥇

Offkie loves to sing and perform the latest hits in front of an adoring audience of her fellow Book Bugs! 🎶 Inspiration for this musical Bug comes from the book, ‘Song for a Whale’, written by Lynne Kelly. It tells the story of how Iris, a deaf twelve-year-old girl, tries to reach out to a whale who is unable to communicate with other whales.

Sable is a top acrobat in the circus! Every Book Bug who has watched her perform agrees that this is where she belongs.🎪 Like Sable, Mallie jumps at the chance to take part in a daring endeavour in ‘Over The Moon’, written by Natalie Lloyd. Mallie stumbles across an evil plot and finds herself in danger…

Ratcha tries to remove all the colours in Bugtopia because, in his ideal world, everything should be in grey and white! Ratcha is inspired by ‘வண்ணத் திருடன்’ (The Colour Thief) by Stephen Aitken and Sylvia Sikundar, where a grumpy giant steals all the colours in the world.

Shy and soft-spoken, Buzznaut finds it hard to make friends. However, those who make the effort to get to know him soon find that he is a wonderful Book Bug indeed! 💖 Buzznaut is based on Auggie from ‘We’re All Wonders’, written by R.J. Palacio. Auggie looks different from other children, but grows to understand that he is a wonder who deserves to be loved.

Search for these titles on your NLB Mobile app go.gov.sg/NLB-mobile!

The book covers are the copyright of the respective publishers. 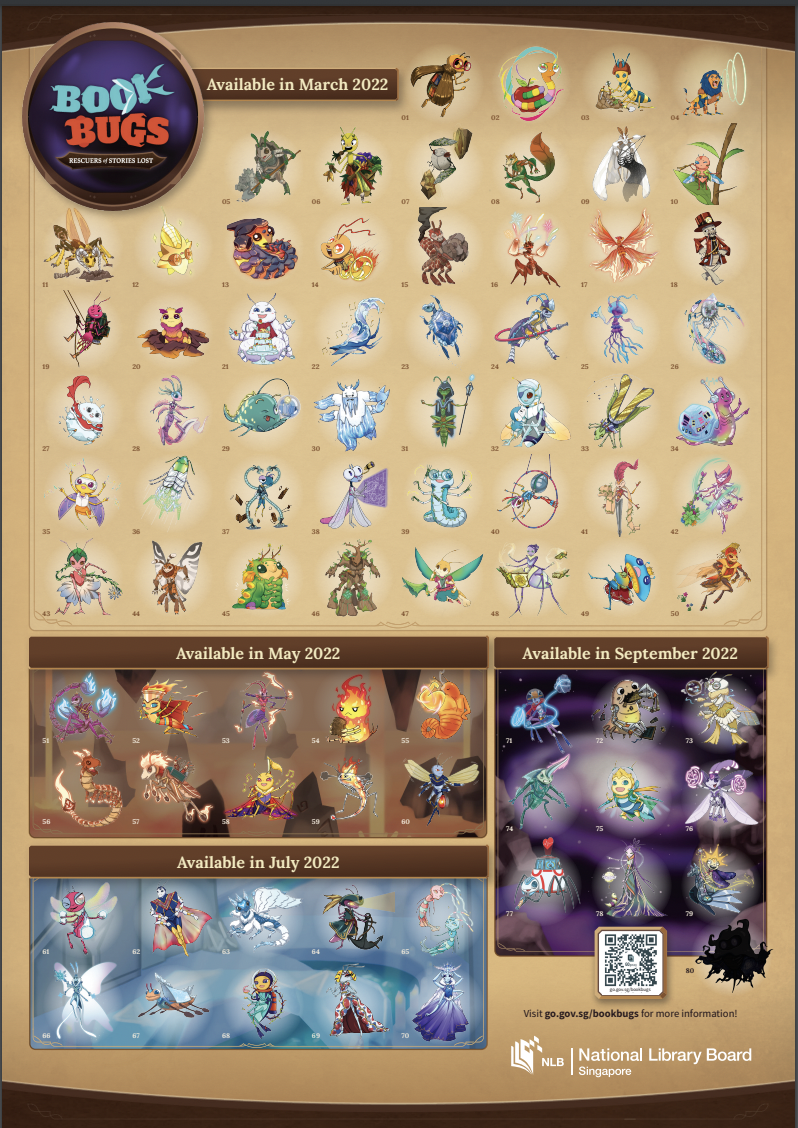