Book Bugs- How to Play

The first player to achieve 20 Game Points wins the match. However, when a player’s Draw pile is emptied, the game ends when said player plays his/her final card. Points are tabulated based on the cards left on the Playing Field. Cards in a player’s hand will not count. The player with the highest total Game Points wins. 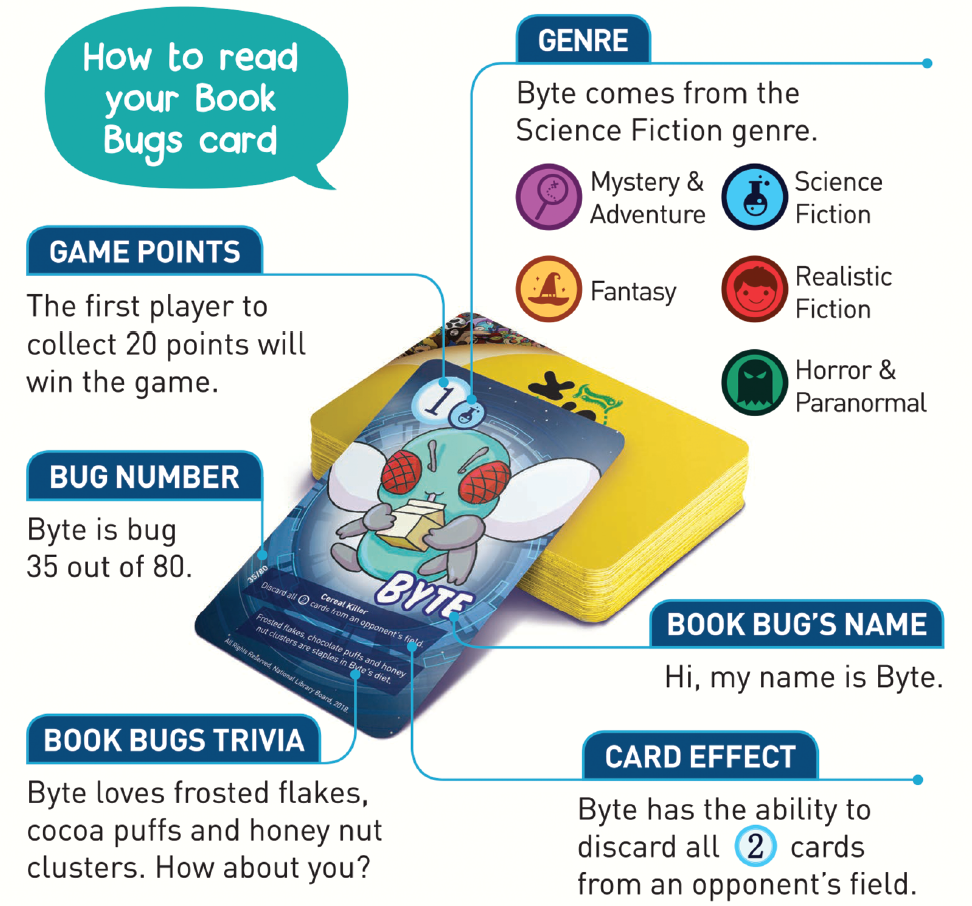 There are 80 different Book Bugs II Cards to collect, each featuring a unique Book Bugs II character. If you’re lucky, you might get a Shiny Card too. Shiny Cards are holographic and rarer than the Basic Cards. There are 15 Shiny Cards in total.

Players may customise their own decks. Understanding different Card Effects will help a player to perform various strategic plays. An average deck size is between 25 – 40 cards.

Each player has their own Draw pile. The Draw pile holds the player’s deck of cards which are kept face down. Before the start of a match, the Draw pile ought to be shuffled. Download your game mat here.

Each player has their own Discard pile. Cards removed from play are placed face up in the Discard pile. Anyone can look at these cards at any time.

Refers to the cards played.

Each player starts with 5 cards in their hand. Cards are hidden from the opponent’s view. At any one point, the cards in a player’s hand should not exceed 7.

Refers to opposing players. Some Card Effects affect all players, and some affect only one opponent of the player’s choice.

To determine who starts the game, each player draws a card from the top of their Draw pile. The player that draws the card with the larger Bug Number starts first. Once decided, both players are to return the cards back to their respective Draw piles and the deck is reshuffled.

Player draws a card at the start of their turn from their Draw pile.

After a player plays a card, their turn will end. The only exception to this is a Book Bugs II Card with the following Card Effect: You can play an additional card on this turn. This card can only be used once in each turn.

The game of Book Bugs II played at a competitive level. All players are expected to abide by the rules. You may view the Book Bugs II Guide for Competitive Play. This will be held in November.

If you’d like to hone your skills further, you can check out the Strategy Guide here